A battery manufacturer in the USA, supplying traditional batteries to internal combustion powered vehicles, wished to extend the life of their units for inclusion in brand new traditionally fuelled cars, and also for their branded aftermarket replacement products.

Only specialist industry professionals understand the extremely complex factors that affect the working lifespan of a car battery. Unfortunately, it’s not just a case of ‘power in / power out’. The traditional product powers the starter-motor of an internal combustion engine, a very initial large load, sometimes after the battery has been standing without any charge for indeterminate lengthy periods. After the engine has started, the battery then runs all electronic systems during driving.
‍

‍The really complicated problem is in assessing the many interrelating factors that effect a battery being drained, then predicting the optimum way of charging it. That’s the job of the battery management system (BMS), by communicating with other systems and devices on the host vehicle. Charging too rapidly can cause as much damage to the battery as allowing it to go completely flat. It’s all about avoiding extremes of ‘drain and charge’ versus peaks and troughs.

The BMS can measure battery drain in real time, but up until now, that has been a ‘linear’ process; detecting which devices drain, then charging ‘tit for tat’. Such techniques lacked the ability to model the non-linear relationships that allow accurate mapping of battery decay. As the load drain of vehicles becomes heavier and the interrelationship of devices ever more complex, the need to use a non-linear calculation becomes essential. Otherwise, a conventional battery might ‘die’ within perhaps two years’ use, whereas current market expectation is between three and five years. With all these factors to consider, the problem is ripe for an AI-powered solution.
‍

The below factors (amongst others) can affect the battery’s remaining useful life (RUL):

We decided that, firstly, fitting a smart sensor of the battery’s loading sources was essential. This was agreed, then prototyped by the client. Crucially, the sensor’s data was telematic in nature, so, it regularly uploaded its findings to the cloud. This allowed for hundreds of vehicles of the same make and model to be examined, together with their environments and owners’ driving styles. The results were ‘clustered’ so that findings were not concluded from just a handful of vehicles in diverse situations.

Then, applying a fusion of AI, comprising neural networks and online networks, combined with Kalman data filtering techniques, would accurately model a given vehicle’s battery decay.

Kalman filtering is an algorithm that reduces the level of ‘noise’, smoothing out noisy data, thereby allowing patterns and relationships within complex models to be seen more clearly.

The autonomous learning nature of AI models using Big Data, as opposed to sporadic anecdotal findings, make them much more able to enhance battery management than with existing systems. Given the fact that even batteries from the same manufacturing batch won’t be identical, data collected from vehicles in various environments was the decisive factor in how the BMS should be controlled.

Not only could the telematics data be harvested, but a mobile app would allow drivers to feedback on any battery problems to the manufacturer, enhancing the accuracy of the overall ‘real life’ picture.

Ultimately, these techniques determined the optimum charging profile/algorithm to prevent damage from overcharging or discharging the battery. In short, car batteries would last significantly longer using this system.

Our client was extremely excited by the potential of the software product we had produced. They were investigating a patent on the telematic sensor, in order to perhaps sell it to other car manufacturers. The client then made plans to change the manufacture of their batteries in light of their new findings. The overall feedback was of a successful outcome for the client and another satisfied customer for Fountech Solutions. 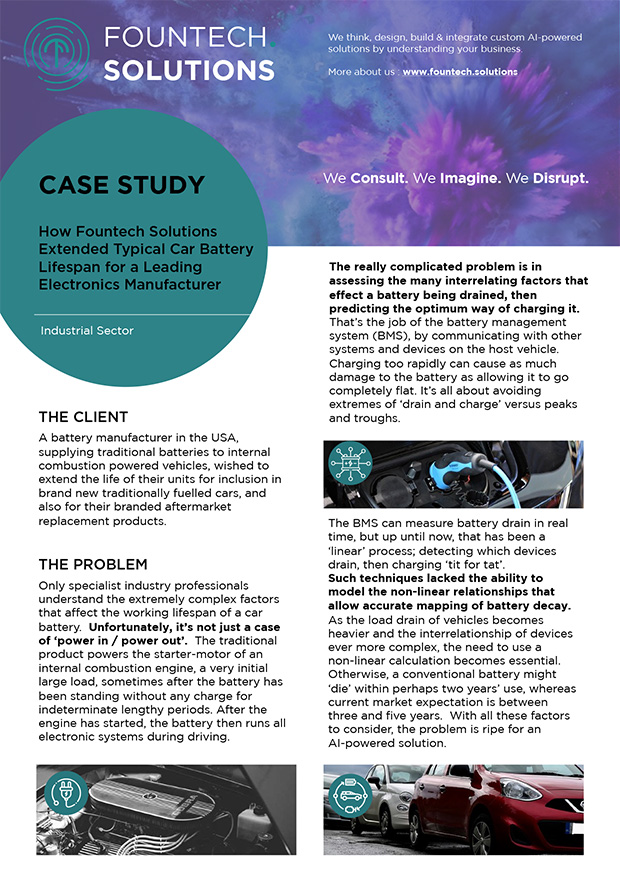