A European motor insurance underwriter with hundreds of employees, approached Fountech to attempt a reduction in costs when processing claims.

The client employed a team of loss adjustors, who would visit road traffic collision sites in response to 24 hour call-out cover, in order to verify and record the damage at each and every incident. The adjustor’s job was to take photographs, make notes of vehicle damages and produce a report for the underwriter.

Paying out on motor insurance claims is an expensive process, not least, because the loss adjustors must attend a site in person 24/7 to approve a claim. Furthermore, in some countries, it is illegal to move vehicles immediately after a collision until an insurance assessment has been made. The adjustor must then use their expertise to estimate the likely cost of repairs, approving or rejecting claims from repair shop bills. This is a long winded and expensive process.

The client’s initial request was to produce software to calculate repair costs from images and information supplied by adjustors at the time of a claim, then automatically update the company’s systems. But our team proposed an extra feature, which would offer drivers the ability to collect the accident information remotely, then submit it themselves using AI capabilities linked to a Progressive Web App (PWA).

The solution had to offer at least the following facilities:‍

Collection and validation of accident information

The final product featured two main components:the PWA for users to send accident information and an automatic claim resolution system to process it.

A damage recognition machine learning model which was fed thousands of pictures of damaged cars. It ‘learned’ to assign different types and severity of damage to appropriate parts, e.g., identifying bodywork impacts either as a scuff or a dent; if a windscreen was scratched or cracked.

Automatic estimation of repair cost. This module takes results from the damage recognition model and accesses dozens of resources, combining data from repair-shop quotes with that of previous similar claims, estimating repair costs for specific vehicles. It continuously ingests data from claims validated by humans to improve its own accuracy.

Optical Character Recognition module to read license plates from vehicle photos, then a face recognition module to process people's IDs and validate identity, with those newly-created records being kept on the underwriter’s files. A fingerprint reader module was also added for an extra layer of security for use at a scene, like a ‘signature’ assigned to a photograph.

A further module was required to connect with the underwriter’s database, to read and /or modify information.

One of the more exciting developments was the artificial adjustor, to assess accident reports and make machine learning predictions, assigning a ‘fault percentage’ to any driver involved. Data was supplied by the drivers themselves, rather than by any lawful authority, so there was a high likelihood of purposeful inaccuracy. Accordingly, the solution also offered a questionnaire, which both drivers were required to submit separately; if versions of events differed, the accident analysis would be passed over to a human claims adjustor for further investigation.

The remote claims PWA app was designed to guide users step-by-step through the accident data collection process. It prompted users to submit all required vehicle pictures, accident information, location, weather conditions, persons involved etc. The app sought permission to access location on mobile GPS, fingerprint scan and ID pictures, and would only allow the submission of pictures taken by the app itself, ensuring their authenticity. Also, the web-based nature of the app would allow other drivers, insured by companies not using the app, to upload their own information and photos to a central repository.

Once a claim was submitted, the procedure for using the various modules was put into place:

At first, a significant proportion of claims generated by the app were passed to human adjustors, representing only partial success; although adjustors did not have to physically attend an incident, they still had to intervene in verifying claims manually.

However, as the autonomous self-verification of the AI improved over time, fewer claims were passed to humans and more were settled quickly and accurately, providing early return on investment for the underwriters themselves, who reported positive feedback. 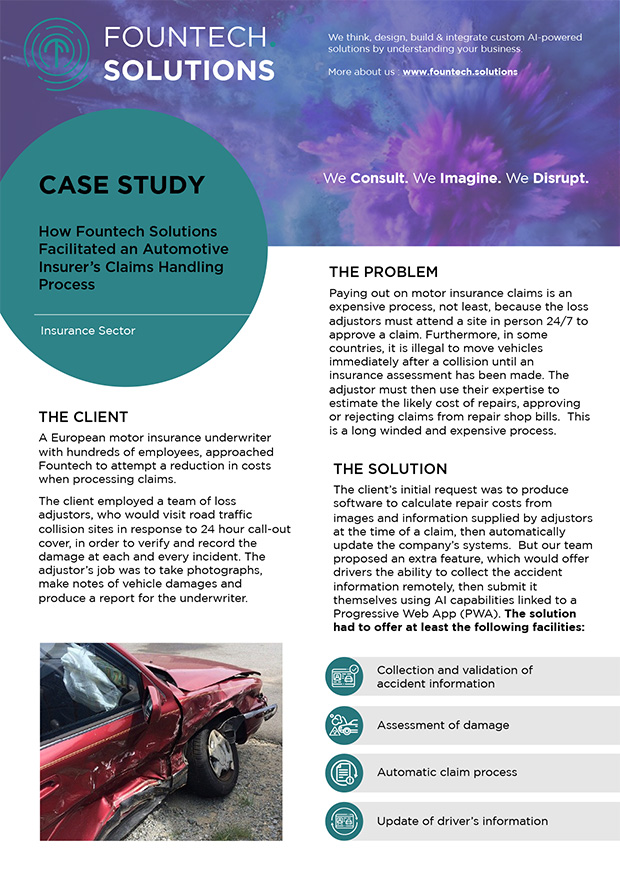