A UK insurance underwriter, providing motoring policies to the general public, wanted to reduce the onerous cost of extremely time-consuming contact periods per customer in terms of claims and pre-proposals.

Our client was aware of the cost and efficiency benefits of using conversational AI as it can free up contact center staff to deal with the most complex queries only.

Our client had some experience of using phone based voice activated ChatBots, along with online ‘messaging’ help on their website.

However, after a matter of months, anyone could see that this was not proving successful, mainly due to the inefficiency of the ‘closed’ decision tree style of Bot programming. The basic ChatBot simply could not cope with anything other than the most basic query (e.g. car registration numbers or postcodes).

In short, as soon as the Bot could not proceed due to an unexpected customer response, it simply put the caller or web visitor on hold, then eventually through to a human contact. Feedback showed that customers were becoming irritated, causing a significant drop in new policy enquiries.

The client approached us as they were eager to explore improvements by using technology that actually worked.

Following discussions with our client, it was ascertained that the three most important goals were:

Taking a new potential customer’s details smoothly in order to automatically generate a proposal price for a new policy. People’s answers should be understandable even if the caller used slang or acronyms.

In the case of claims, all the details required for a standard claim form should be taken by a conversational agent in the claimant’s own words.

A facility for being able to track claim progress was also required. Again, only in the case of serious complexity or repeatedly unanswerable questions should the AI hand over to a human agent.

It soon became clear that accurate voice transcription was paramount, followed by the AI’s algorithms making educated associations between phrases and follow up questions. One factor that particularly impressed the client during initial training was the AI’s ability to understand context by using appropriate memory modules.

Q: “Please state the weather conditions at the time of the accident.”

If the caller answered:

“It was pouring with rain”;

then any ChatBot could have recorded that answer, because the keywords rain, fog, snow, hail etc would be pre-programmed. But when forced to deal with a caller who wanted to add more detail, a decision tree ChatBot would almost certainly fail if it received something like:

“The road was inundated due to blocked drainage and no camber.”

However, meta-associations allowed our AI to associate the words ‘inundated’ and ‘drainage’ with the presence of water or flood, so it replied:

“It seems like the road was flooded at the time, is that correct?”

“Yes. There were deep puddles that pulled the car to the left when I braked.”

Our AI could then conclude that the cause of the accident was not only wet weather, but the fact that the claimant’s vehicle was probably moving.

“Thank you, please confirm your vehicle’s speed at the time of the accident…”

This is just one very small example of the capabilities of true conversational AI as opposed to fixed pre-programmed Bots, which can often turn out to be worse than useless.

Our conversational agent is still in beta, but early indications are extremely promising, with users reporting interactions that felt genuinely useful.

Our AI is still handing over certain issues to human agents, but it is clear from beta results that these queries are of a nature where discussion with a staff member is essential. Ultimately, this can only lead to fewer callers on hold, each for shorter periods.

It is also evident that this technology can be used in any form of insurance company context, from travel to medical or life policies. Discussions are already underway with our client’s travel division to commence similar beta-testing when dealing with holiday claims and new policies. Travel and holiday insurance is a notoriously busy sector within the insurance industry, but the more data and interactions that our conversational AI encounters, the quicker, more efficient and more accurate it becomes, so we look forward to this next chapter with eager anticipation. 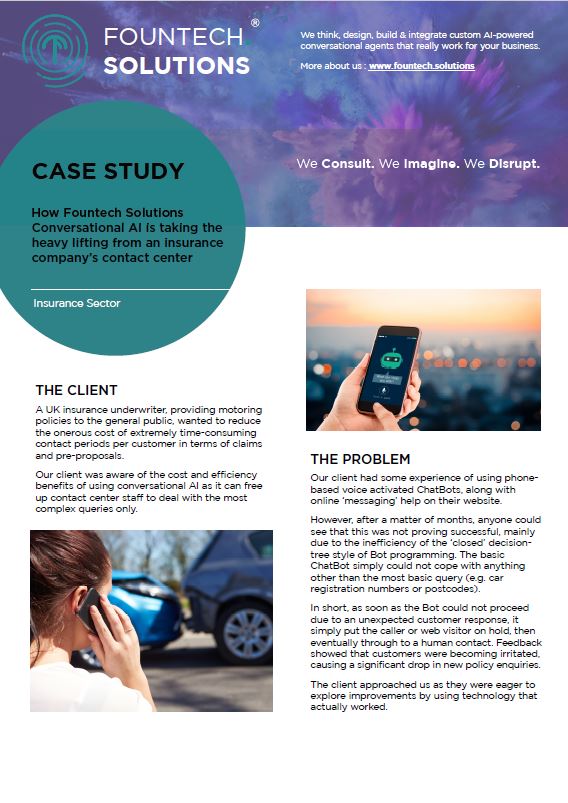