A European insurance underwriter, providing motoring policies to the general public, wanted to offer affordable insurance premiums to safe drivers, while identifying those who were likely to make claims as a result of poor, even dangerous, driving styles.

The client was aware that by using the technology of ‘telematics’ (remote in-vehicle monitoring devices), the driving habits of their policyholders could be remotely assessed and recorded onto a database. At policy renewal intervals, riskier drivers could be priced out of reach, but safer motorists tempted to purchase policies at lower annual premiums.

For many years, before telematics technology became accessible, motor insurance premiums were calculated by underwriters solely in terms of various criteria: the person’s age, occupation, annual mileage, car make, engine size, driver’s accident history, penalty points on a licence, geographical use of the vehicle, and hundreds of other variables.

Such calculations use a ‘broad brush’ approach, whereby safer drivers are often penalised for being placed in a ‘category’ of those with a high accident history, simply because they might drive a similar vehicle or live in an area showing similar demographics.

Telematics can certainly assist in identifying safer habits, but simply assessing average speeds and frequency of journeys isn’t nearly enough in itself.

For a clear picture, interpretable reports of all data acquired by the monitoring device, is relayed to a user-friendly dashboard.

The information is then transparent, so that its interpretation is clear and usable.

Access to that interface by the insurer and the insured alike can help the driver to improve safety.

This allows the insurer to integrate traditional risk assessment criteria with telematic data.

‍Following discussions with our client, it was agreed that the metrics for assessing a driver’s behaviour should be, amongst others:‍

The above criteria were very carefully defined mathematically, in far too much technical detail to describe here, but the analysis methodology was exceptionally refined and accurate in nature. For example, weather history databases were interrogated, g-force cornering measurements excluded false-positives from speed-bumps, speed limit areas were double-checked against known data and GPS locators to within meter-accuracy.

Not only was the data to be collated and made available to all parties involved, but crucially, Fountech Solution’s AI would allow underwriters to much better understand the specific relationships that affect claim likelihood against given variables. To do this, the AI had to be ‘trained’ with given ‘benchmark’ data of claim histories, applied to a newly created sample control group of telematic device users.

Consequently, we worked with the client to launch a data acquisition campaign, offering discounts to existing customers who agreed to participate. Drivers with at least seven years’ insurance claim (or claim-free) history would anonymously make their claim patterns available, going back as far as possible, and that data matched against a real-time, on going six month analysis of telematics findings for those individuals.

We ensured that an equal number of drivers of each group were assessed, based on their premium prices.

We thereby created an easily understandable' overall risk score' for drivers, sourced across many insurers' traditional criteria, combined with the empirical telematics data. The designated score would suggest premium price adjustments (up or down) into one of six groups, based upon the drivers' assessed habits against the known likelihood of a claim.

The adjustment prices groups were:
‍

Our system used a supervised learning technique of a neural network, which created the association between the relevant metrics mentioned earlier to make a likely prediction of an outcome. The algorithms were further tested by feeding unseen data from drivers and checking its accuracy in predicting the driver’s actual current fixed premium price. This technique validated the system’s accuracy. Every time new data was added, the more the AI autonomously re-trained.

The final results were available via an easily understandable dashboard, allowing insurers to accurately adjust premiums, and motorists to save money by altering any bad driving habits.

Our client reported an almost immediate uptake in renewal business against lower premium offerings, which is unsurprising in itself. However, they were happy to confirm that fewer claims were made pro-rata in the months following the inception of the new financial model.

The longer term picture has not yet been able to be assessed. However, any insurance company that takes on a greater number of safe drivers at lower premiums is sure to be more successful than one that sells fewer, yet at higher premiums, on which they will be more likely to pay out on expensive claims. 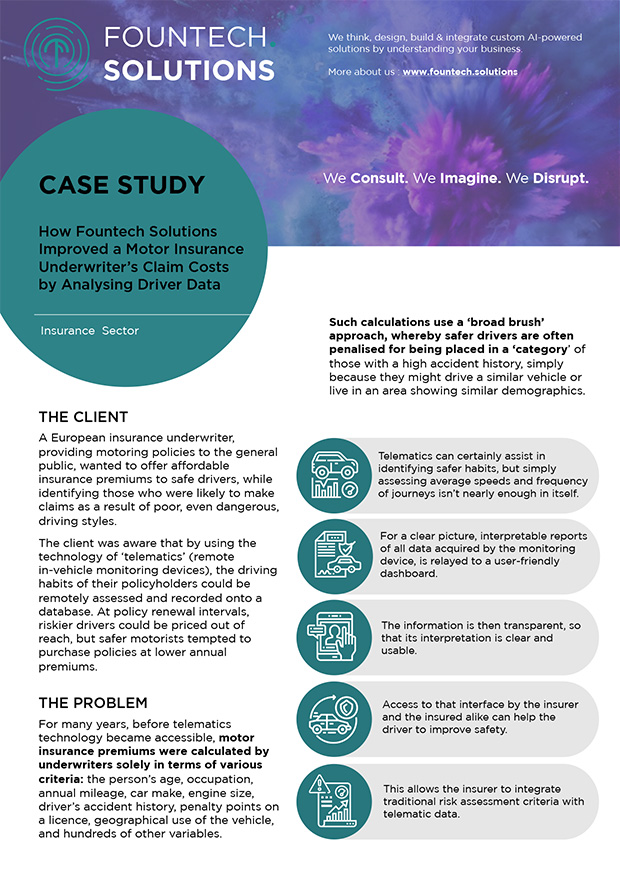