A European provider of mobile phone, internet and data services approached Fountech Solutions to find ways of dealing with two distinct but equally important issues. This client had a prominent market profile; contact volumes to their customer service teams in various European countries was extremely high.

Likewise, a very large number of customers means a vast quantity of voice calls and data traffic on their network; the client were focused on preventing outages and bottlenecks across their ever-growing infrastructure. They knew that Artificial Intelligence could be harnessed to help with these issues, so they approached Fountech Solutions.

In terms of customer service, the ongoing problem was one of answering day-to-day queries. These arrived by voice calls and ‘online chat’ to human agents (assisted initially by ChatBots) at an outsourced call centre. Clearly, the longer a customer’s problem takes to solve, the more costly in terms of time, and the less likely the customer is likely to remain loyal.

In terms of technical issues over networks, failures almost always occur when peak traffic overloads infrastructure. Local load peaks often occur after major news stories break, or during major sporting events. Hardware failure on remote sites is an ongoing issue. Analysing these problems to predict them before they occur would enable the provider to ‘load balance’ the network, preventing bottlenecks or complete local service failure. Such analysis by humans and non-AI computing is almost impossible to achieve accurately.

To address customer contact issues, data analysis revealed that domestic hardware failures (usually routers) were the first cause of complaints, followed by billing enquiries or requests for contract changes and / or upgrades. Basic ChatBots can be useful for certain interactions, but only to a very limited extent. They only tend to perform well on a set of predefined questions and answers. Consequently, the Fountech team created sentiment analysis algorithms, identifying positive or negative reactions, in particular frustration, based on message wording. This allowed the ChatBot to adjust to be less irritating, or to identify cases where human intervention was needed quickly.

This strategy allowed the attention of staff to be directed only when it was definitely required, but casual enquiries could be handled by suggesting a pre-defined course of action or offering a call back at a less busy time. Furthermore, when human intervention is actioned, the operator already has a clear picture of what the customer needs.

Crucially, in order for the AI to learn autonomously as to when it should hand over to a human, the model was informed, via a feedback loop, of a human operator’s decision and adapted its parameters accordingly. Gradually, over time, the model learns the optimal action for simple problems, until it is safe to perform those tasks on its own. This leaves more time for human operators to focus on more complex responsibilities.

When dealing with billing and accounts, significant improvements were enabled by unsupervised learning techniques such as clustering algorithms. These could make offers of upgrade packages or better deals for people thinking of switching providers, identified by their historic behaviour.

The team were further able to map customer profiles to tempting packages by partial personalization; offering a call / data product at a certain price, correlated neatly by age, gender, geographic location, 'streaming' usage etc. If a customer chose an offer, the ChatBot interacted with a CRM / payment gateway, thereby closing the deal without the need for human intervention.

Our team designed AI with a supervised learning technique to mine data and build mathematical relationships, predicting network failure or detecting its onset. This can enable timely rerouting of network traffic to different cell towers. This technique uses previously categorized data to obtain representations of normal and abnormal behaviours, but AI can go further, looking at historic reasons for such congestion and alert human operators.

Our client was pleased to report an overall improvement in contact handling times and a slightly increased customer retention rate from initial intentions to switch providers. Crucially, more new customers were converted from ‘cold’ website queries. As regards the network, fewer dropped calls and data outages were experienced.

As these results are relatively recent, it’s important to remember that the autonomous learning nature of the AI improves over time, so it’s likely that things will only improve even further. 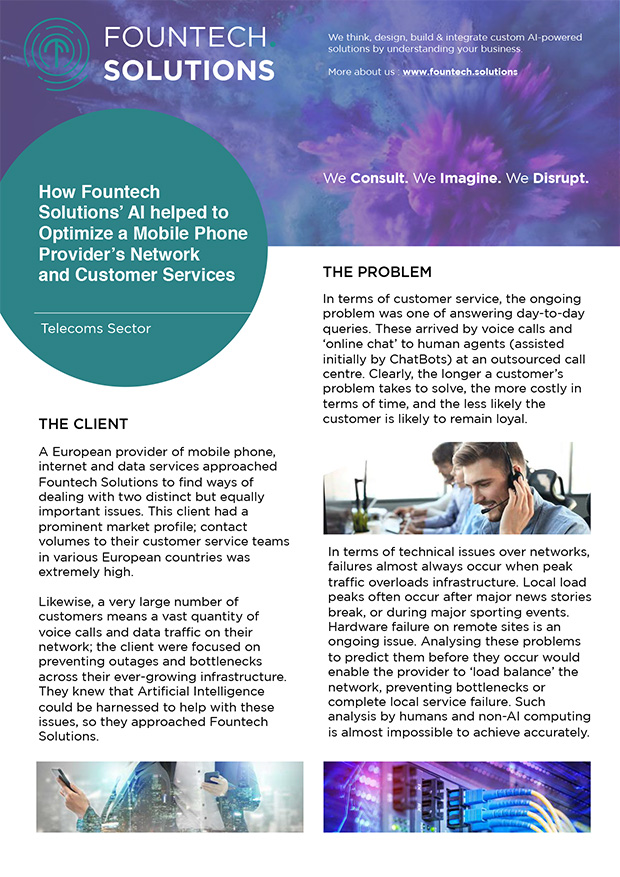